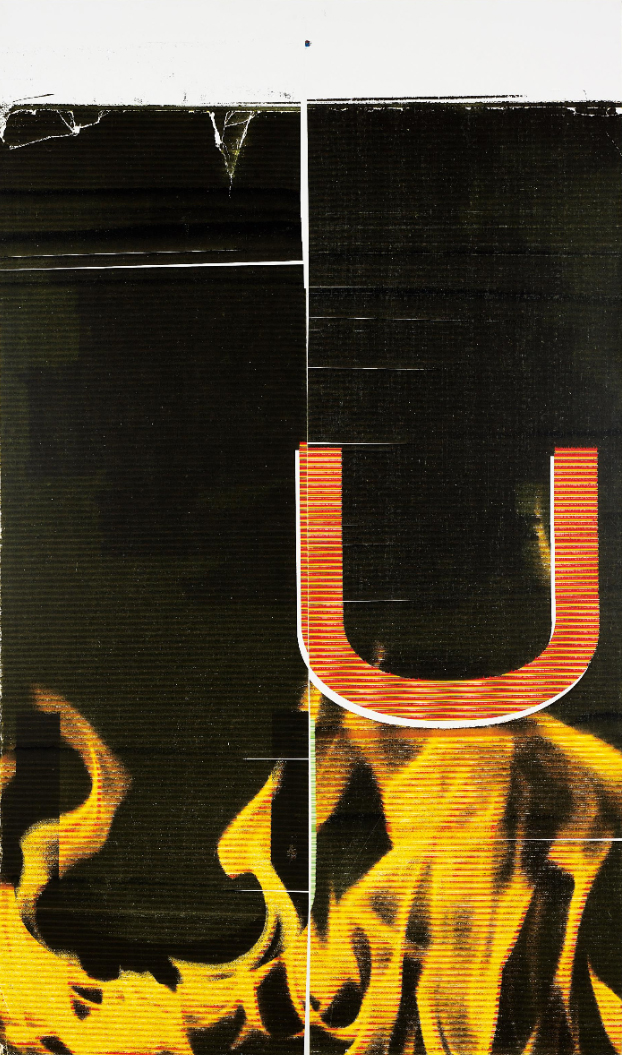 Wade Guyton (b. 1972) is an American artist known for using large format printers, desktop computers, and scanners, to make digital “paintings” on canvas. Guyton’s process does not involve the traditional hand application of paint to a surface. Instead he feeds canvas, folded in half, through his Epson printer. By folding the canvas in half, Guyton encourages complications in the printing process, a process commercially embraced for its easy ability to create sameness. Following a simple command to “print”, the printer has difficulty with the thickness of the canvas. This creates ink blotting and smearing, misalignment, frequent jams, machine failure and stoppage. Guyton is known for his “X” paintings, which began in 2002, before he began using large format printers and was a result of an even earlier obsession with a “blacking out” of photographed architecture (see “Drawing for a Sculpture the Size of a House” 2001). In 2002, he attempted to draw a black “X” over a page from a design magazine using a ruler, to “cross-out” the contents of the page. However the “X” proved more difficult to draw and Guyton decided it would be better to print an “X” from Microsoft Word over the page. This would initiate a series of “Printer Drawings” that would grow to include U’s, colored dots, lines, holes, among other minimal gestures. “X” is the most basic form of signature and Guyton’s repeated use of it suggests an acknowledgement of deliberate and constant interfering. Looking at his works, the viewer can easily notice every inconsistency, every human-provoked machine error. His works are in a sense crossed and re-crossed and doubly signed each time the printer cannot handle the parameters. The printer, is pushed to exhaustion, and has to squeeze out the folded canvas. A further interruption is recorded when Guyton prints the other folded half, creating more inconsistencies, in which even the negative white space, the area where the printer does nothing, becomes authorial. This expressive technique of chance can be traced to Jackson Pollock’s drip paintings in which the artist employed gravity to help determine the finished picture. A similar gravitational reference to Pollock can be found in Guyton’s freestanding “Untitled Action Sculpture”, an appropriation of the Breuer Cesca chair. Influenced by Robert Morris, his teacher at Hunter College, Guyton’s practice also includes sculptural production. His mirrored, suggestively titled, “U” sculptures, a 2D sign rendered as a 3D object, can be viewed as a continuation of Morris’ “Untitled (Three L-Beams)”, 1965-6, as well as a reference to our current, self-stretched, digital environment. Wade Guyton is represented by Friederich Petzel in New York, Gió Marconi in Milan, Galerie Gisela Capitain in Cologne, Galerie Francesca Pia in Zurich and Galerie Chantal Crousel in Paris. His contemporaries include: Kelley Walker, Stephen Prina, Seth Price, Tauba Auerbach, Tomma Abts, Mark Grotjahn, Eileen Quinlan, Sergej Jensen and Cheyney Thompson.