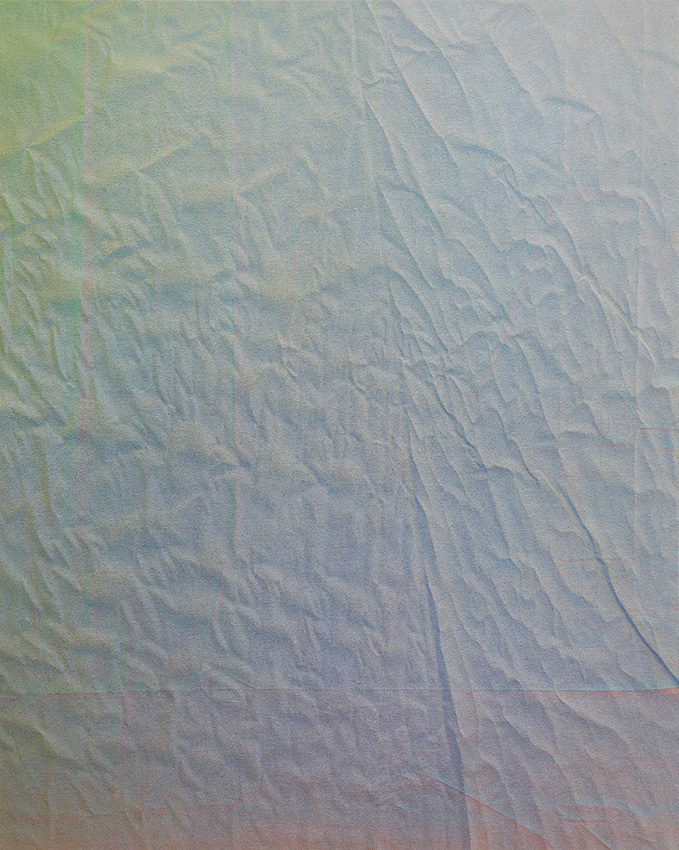 Tauba Auerbach (b. 1981) is an American artist born in San Francisco, the daughter of theatrical set designers. She studied math and science at Stanford University before becoming a sign painter for three years. Auerbach fuses her interest in math and science with visual art exploring flaws/loopholes in systems of logic, binary relationships, and asymmetry. With her early work from 2006, she explores an interest in systems of logic, namely linguistic systems. Breaking down letters to their basic components, Auerbach uses these components to create visual representations. Components of letters, or her graphic assignment as letters, are used as individual pieces that, when combined, result in the end picture. Our system of speech is a key component of art, as it is used to communicate our thoughts about visual art. The merger of the visual and the literal is a reductive gesture whose roots can be found in Carl Andre's "Concrete Poetry" and in Sol Lewitt's "Red Square, White Letters", 1963. Auerbach's works express themselves within this space of merger. Although they are linguistically bound, they are often illegible. This theme of system-negation runs throughout her work. "The Whole Alphabet, From the Center Out, Digital, V", 2006, organizes the letters in the English alphabet according to their basic lines (a digital-clock-like expression of "Components, in Order", 2005) and reassembles them, A-Z, from the center out, with colors to identify each individual letter. Her investigation into binary representation and randomness was beautifully executed on the floor of Deitch Projects in 2008 during the "Constraction" exhibition. In this work, black and white floor tiles of equal count were selected randomly and placed on Deitch's gallery floor creating a pixel-like representation of the gray floor beneath. "Crumple I", 2008 presents the viewer with a trompe l'oeil optical illusion of canvas crumpling. This series leads to her "Fold" series beginning in 2009 in which Auerbach folds and crumples a canvas, sprays paint on the canvas from different angles, and then flattens and stretches the canvas resulting as two-dimensional product. This two-dimensional recording of a once three-dimensional form is significant in the fact that the paint represents the actual canvas (or what the canvas used to be) and the canvas supports the painted picture. One acknowledges the other (see also Simon Hantaï, also known for his folding and crumpling works from the 1960s). This co-dependent acknowledgement is further expanded in her "Weave Paintings", in which an image of weave patterning is woven directly as canvas, recalling the work of Rosemarie Trockel's knit-works (produced in the 1980s) and Liza Lou's beaded "Canvas" series (appearing almost simultaneously with Auerbach's work). Her interests range from painting and sculpture, to fashion and music all united by her fascination with math and science. In 2009 she created a pump-organ "Auerglass" which can only be played if two people are operating the instrument, another subversion of the expected. Tauba Auerbach lives and works in New York City and is represented by Paula Cooper Gallery.