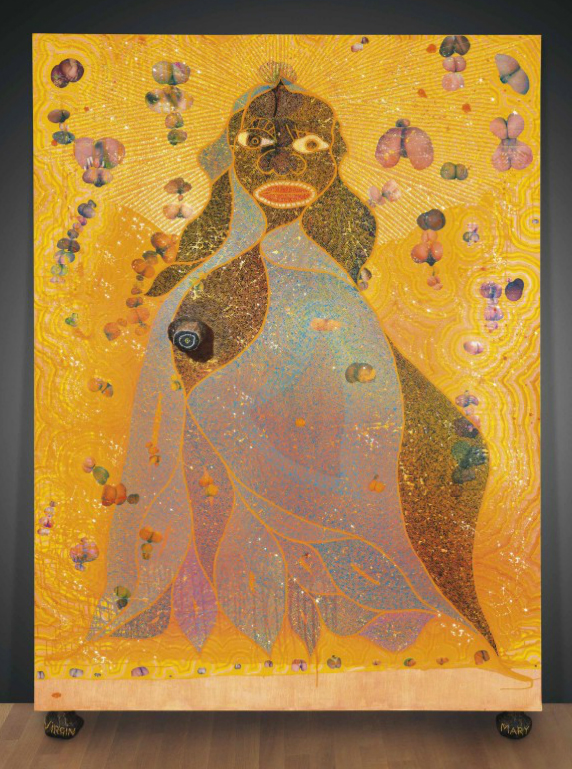 Chris Ofili (b. 1968) is a British painter whose career was established in the mid 1990s as a result of public outrage. His “The Holy Virgin Mary”, 1996, caused uproar in 1999 when it was exhibited at the Brooklyn Museum of Art as part of Charles Saatchi’s exhibition of his personal collection titled “Sensation”. Exhibited alongside fellow YBA artists (Damien Hirst, Tracey Emin, Sarah Lucas, Marc Quinn, and Jake and Dinos Chapman), Ofili’s painting of the Virgin Mary, which included resin-covered elephant dung and cherubim figures shaped from pictures of female genitalia, caused such a controversy that the mayor of New York, Rudolf Giuliani, threatened to withdraw the annual $7 million grant to the museum and filed a lawsuit against the museum which briefly halted federal funding. Ofili’s work, beginning in the 1990s, gathered inspiration from religion, gangsta rap, blaxploitaion films, music, pornography and psychedelia, which he fused in collage-like fashion to create paintings that simultaneously provoked and dazzled spectators. These works primarily used elephant dung, glitter, map pins, dots, and magazine cutouts. Casually conceptual, at times political, Ofili’s combination of cultural fragments manage to transform his works, by default, into a realm of debate, which in turn speaks a lot about the way many people attempt to deal with art works that choose to hold a representation of black identity as core value. In Ofili’s case, one can sense that shock has nothing to do with his work, but shock is applied as a result of greater cultural ignorance. Works such as “Afrodizzia”, 1996, pays homage to black musicians and is depicted using the same materials of elephant dung, etc. as the controversial “The Holy Virgin Mary”, 1996, and his “Double Captain Shit and the Legend of the Black Stars”, 1997. “No Woman, No Cry”, 1998, is an endearing reflection on the racially motivated murder of Stephen Lawrence. “Princess of the Posse”, 1999 (named after a song by Queen Latifah) and “Mono Oro”, 199-2002, display the richness of materials and color unique to Ofili’s talent. After moving to Trinidad in 2005, Ofili began his series known as the “Blue Paintings”. At this point he abandoned the loud materials that made him controversially famous, the dung, glitter, and dots, pursuing a more somber direction. “Iscariot Blues”, 2006, continuing to “Blue Devils”, 2014, are deep reflections on the barely perceptible presence, nearly obscure appearance of black struggle today among a mediated populace. The former depicts a band playing while a man hangs and the latter portrays police misconduct, in cult and shadow-like fashion upon a black individual. The title “Blue Devils” is taken from a Trinidadian festival in which some participants, those covered in blue paint, are allowed to behave more menacingly than others. This is obvious allusion to the inequality with which the police, (the boys in blue) in the US and UK have repeatedly treated black individuals. Other works, from 2007 onward, embrace influences from Art Nouveau, Matisse, Gauguin, and German Expressionism. See "Ovid-Metamorphosis” paintings 2011-12. Ofili continues to challenge himself and his audience with these paintings, by embracing movements and artists that are widely considered unfit for the context of Contemporary Art. Since his early use of elephant dung, Ofili continually embraces misfits (materials, subject matter, and methods). His are works that shouldn’t work, but do work. Chris Ofili is the 1998 winner of the Turner Prize and is represented by David Zwirner in New York, Victoria Miro in London, and Contemporary Fine Arts in Berlin. He lives and works in Trinidad, London and Brooklyn. See also: Mickalene Thomas, Kerry James Marshall, Robert Colescott, Ellen Gallagher, Peter Doig, Georg Baselitz, George Condo, and Carroll Dunham.