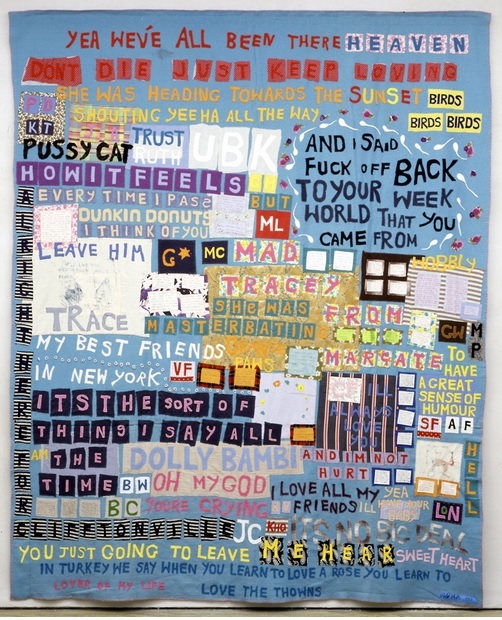 Tracey Emin, Mad Tracey from Margate. Everyone´s Been There, Signed and dated 'TRACEY EMIN 1997' (lower right edge), appliqué blanket, fabric from clothing provided by friends, 105 7/8 x 84in. (267 x 216cm.) Executed in 1997 © Images are copyright of their respective owners, assignees or others.

Tracey Emin (b. 1963) is a British artist known for her involvement in the group known as YBAs or Young British Artists. The core of the YBAs graduated from Goldsmiths BA Fine Art degree course from 1987-90. Among the members are Sarah Lucas, Liam Gillick, Gary Hume, and Damien Hirst. This group held their shows throughout the 1990s and set a precedent for the London art scene of artist-curated exhibitions. Tracey Emin belongs to the second wave of YBAs, which include Douglas Gordon and Tacita Dean. Emin is known for sharing intimate details of her life and for her reflections on love and sex through various media from neon, drawing, and sculpture, to embroidery, quilt making, and video. Her works are like journal entries and most involve text and statements. Roberta Smith from the New York Times writes: “In her art she tells all, all the truths, both awful and wonderful, but mostly awful, about her life.” One of her earliest and most famous works, “Everyone I Have Ever Slept With, 1963-1995”, consists of a tent with the names of everyone who she has not only had sex with (32 out of the 102 names), but all those whom she has slept next to, for instance, her twin brother. This work was featured as part of Charles Saatchi’s “Sensation” show in 1997. The shocking reaction to her work in “Sensation” helped Emin’s rise to art celebrity and created a stage for the sharing of more personal details. “My Bed”, 1998, is an installation work by Emin which presents the viewer with her dirty, comforter-strewn bed, accompanied by empty vodka bottles, blood-stained underwear, condoms, cigarettes, a boyfriend’s joint, ashes, and cigarette packs. She completed this work after what she calls a ‘mini-nervous-breakdown’ during which she stayed in bed for four days, after which she decided that the bed and all its filth would be her art. Deciding to position an everyday object in the context of the white space of a gallery is nothing new. Emin joins in a succession of artists who have used the gallery and institution to subvert meaning or legitimize the everyday as unique object (see Rauschenberg “Bed”, 1955). However, Emin’s contribution is extremely autobiographical and succeeds in personalizing the readymade object. With “My Bed” Emin states: “I just thought it looked like a damsel in distress, like a woman fainting or something, needing to be helped.” Always embracing the personal she creates works of her handwriting transformed into neon signage as a sort of frozen performance, almost like a celebrity signature. See “I Can Feel Your Smile”, 2005, and “Angel Without You”, 2012. Emin’s life has become a sensation and her life is her art, but she does not describe herself as a performance artist. Her art is a “tell-all” as Roberta Smith remarks, and Emin does not hide, as most artists do, behind elusive metaphor. Her body of work is a self-portrait and she is celebrated for this forwardness. Tracey Emin is represented by Lehmann Maupin in New York and White Cube in London. Other YBAs not mentioned above include Jake & Dinos Chapman, Marc Quinn, Jenny Saville, Rachel Whiteread, Chris Ofili, Glenn Brown, and Gavin Turk.