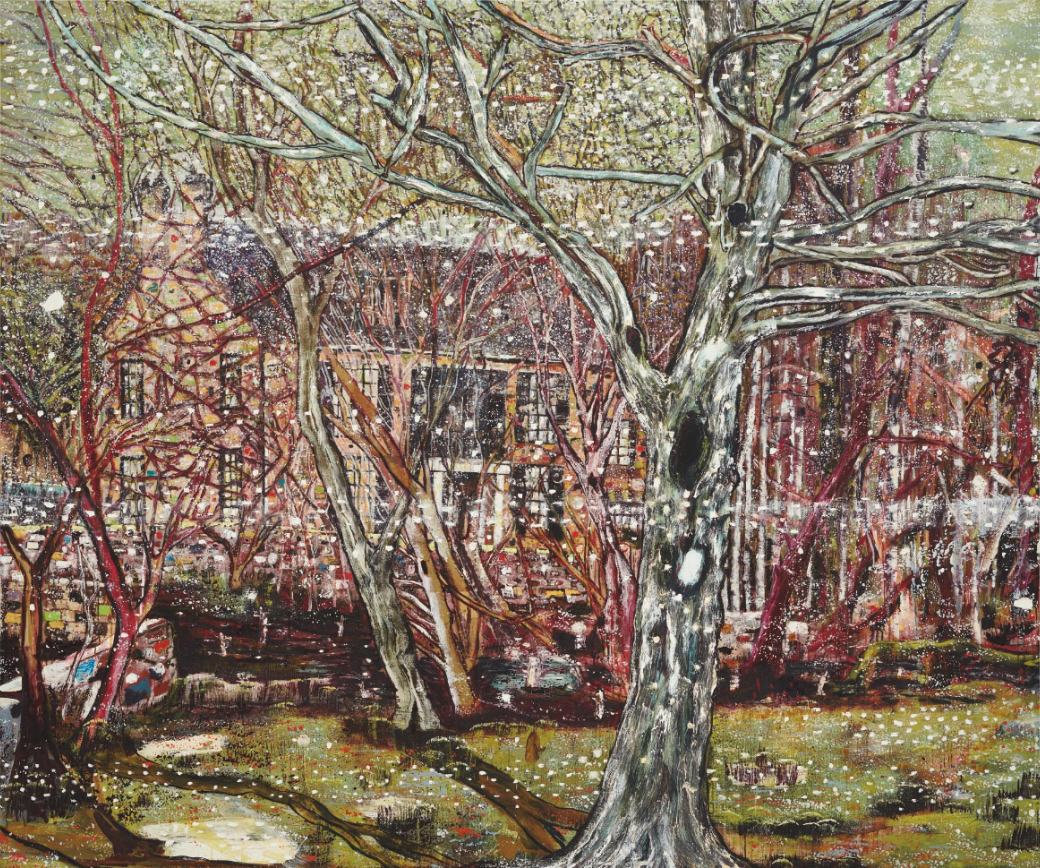 Peter Doig (b. 1959) a painter, born in Edinburgh, Scotland, creates dreamlike representations of landscapes from found photographs that often include a solitary figure. He is European, in essence, but he has lived in many different places throughout his life. His reflections on wandering are explored in his artwork. In 1962 he moved with his family to Trinidad, he then relocated to Canada in 1966, to London in 1979 where he studied art, and finally back to Trinidad in the early 2000s. His work metaphorically reflects the strangeness of being an outsider or voyeur in a land that one is not entirely native to. The variety of vibrant colors that fill his canvases are also out of place. He employees photography but does not portray scenes with photographic likeness. Colors applied are of a hallucinatory or dream-like looseness that immediately recall the saturated paintings of Henri Matisse, Edvard Munch, Paul Gauguin, Pierre Bonnard, Edouard Vuillard, or Canada’s own “Group of Seven”, images in which color and form are interchangeable and fluid, a visual protest sparked by the arrival of the portable camera. Doig’s earlier mature works of Canadian landscapes and activity are deeply imaginative. Doig created these works while in London, totally detached from the land of his childhood. In “White Canoe”, 1990-91, Doig presents a canoe floating in an abstract wilderness (inspired from a scene from “Friday the 13th"), in which a girl is hiding. The canoe appears many times in Doig’s work and can be understood as an intrusion in the vast wilderness. This theme of intrusion can also be viewed as awkward inclusion. Just as the viewer struggles to figure out exactly what they are looking at, whether a vague figure in a canoe in this example or arbitrary blocks of color as seen in “Ping Pong”, 2006-08, most subjects in Doig’s paintings seem questioning in their very presence, creating a tension wholly significant. A Le Corbusier apartment building (“l’Unité d’Habitation”, France), confronts a wild forest in “Concrete Cabin”, 1994, a reflection on modernism alluding to Mondrian’s disruption of pictorial representation. His paintings began to find strange success in the 1990s, at a time when the conceptual art of the YBA generation (Damien Hirst, Tracey Emin) was on the rise. Representational painting during this time was widely thought to be irrelevant. One can view Doig’s entire oeuvre to date as an intrusion. He moved to Trinidad in 2002, inserting himself, a European, on what he has called the edge of the world where he continued to explore the disquieting and the unfamiliar. Trinidad is a very dangerous place, although one rarely witnesses the violence. The off-guard figure in “Pelican”, 2004, suggests this mood, as does "House of Pictures (Carrera)", 2004, in which Carrera Convict Prison floats in the background. One gets the sense, through his video interviews, that Doig himself is ironically a stranger even in the contemporary art world. His public interviews in lecture halls seem awkward as he explains one picture after another. It would seem that this would not be necessary as we all should be quite adept in understanding and reading landscape painting. The clues to deciphering the works are radically present. However, the disorientation and questioning provoked by modernism to contemporary art has left most viewers suspicious of even the obvious. Perhaps this is why many of his works look like deteriorating or corroded photographs. Peter Doig is represented by Michael Werner Gallery. See also Chris Ofili, Zeng Fanzhi, and Anselm Kiefer.

Video: Peter Doig: International Drifter. A lecture by a Sarah Milroy at the Montreal Museum of Fine Arts, as part of the exhibition "Peter Doig: No Foreign Lands"
View Lot