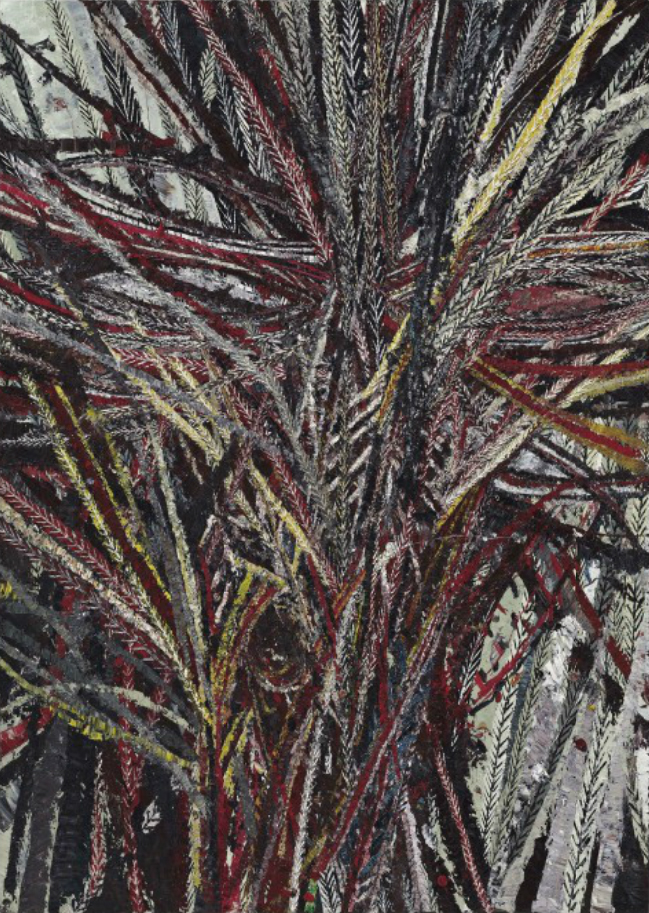 Mark Grotjahn (b. 1968) is an American painter and sculptor living and working in Los Angeles. He is known for his use of multiple perspectives, situating one vanishing point slightly off-kilter, next to another. This is first explored in his “Three-Tiered Perspective” series beginning in 1997. And later in the vertical perspective arrangements, know as his “Butterfly” series. This exploration into perspective has established Grotjahn as one of the leading abstract painters working today. Initially it is difficult to view these works as entirely abstract. We feel like we have seen this before in the Op Art of Bridget Riley or through Minimalist works of Frank Stella. The references continue: His use of perspective lines – typically used to create the illusion of objects in space – are in this case object-less, flattened, and represented as a shallow icon/trademark that Grotjahn creates over and over again, in true Pop Art spirit. Grotjahn executes this group of works in similar systematic manner of instruction as Sol Lewitt, working with self-imposed rules like, random color-selection, followed by counter-clockwise, segment-by-segment coloring. Grotjahn’s application of color, results in a density of surface material, colored pencil or oil paint, whose impasto dominates the picture surface, a saturated exaggeration of the surface effects of Abstract Expressionism.

Through his sampling of movements from art history’s recent past, Grotjahn creates a sort of “sign exchange”. His earliest works were just that. In his work, “Sign Replacement Project”, from the early to mid 1990s, Grotjahn made hand-painted copies of store signs and then traded them with the storeowners for the original. This performance work confused notions of originality. On one hand the original signage seems to be the origination. On the other, the act of painting and replacing the sign seems original since this gesture marks the beginning of the sign’s entrance into a critical field. A blending of origins, especially modern art origins, consumes Grotjahn's art practice.

It is difficult to locate Grotjahn’s work as a continuation of any previous art movement. Instead, he uses movements, from the 1900s onward, as subject matter. He posits them against one another, within one work, in a sense combining multiple perspectives. One can easily view this tactic in his monochromatic “Butterfly” paintings, when considering the inclusion of his signature, not as inscription, but as surface removal. The monochrome is used to create a new sense of whole object, one with an interior, one that operates as trademark. In his “Butterfly” drawings, we see conflicting styles apparent in the use of hard-edges, recalling Minimalism, combined with the emotive expression of the dense marking of colored pencils. In his later “Face Paintings” series, pure abstraction, seen in the thick layers of paint, is blended with figuration and Primitivism, lines apparently referencing Paul Klee or Henri Roussaeu. This is further confused when one realizes that an abstracted form of Grotjahn’s own perspective motif is radically present in these works. All of these combinations provide Grotjahn with a field to expand upon. A personal field made up of a dense history of arguments and concepts that Grotjahn reverses and collapses in his abstractions of art itself. According to Robert Storr “Grotjahn is not an artist obsessed with positing a wholly unprecedented 'concept' of art, but rather is concerned with teasing nuanced experience out of existing concepts or constructs according to the opportunities presented by a specific, well-calculated conceit.” Mark Grotjahn is represented by Gagosian Gallery.