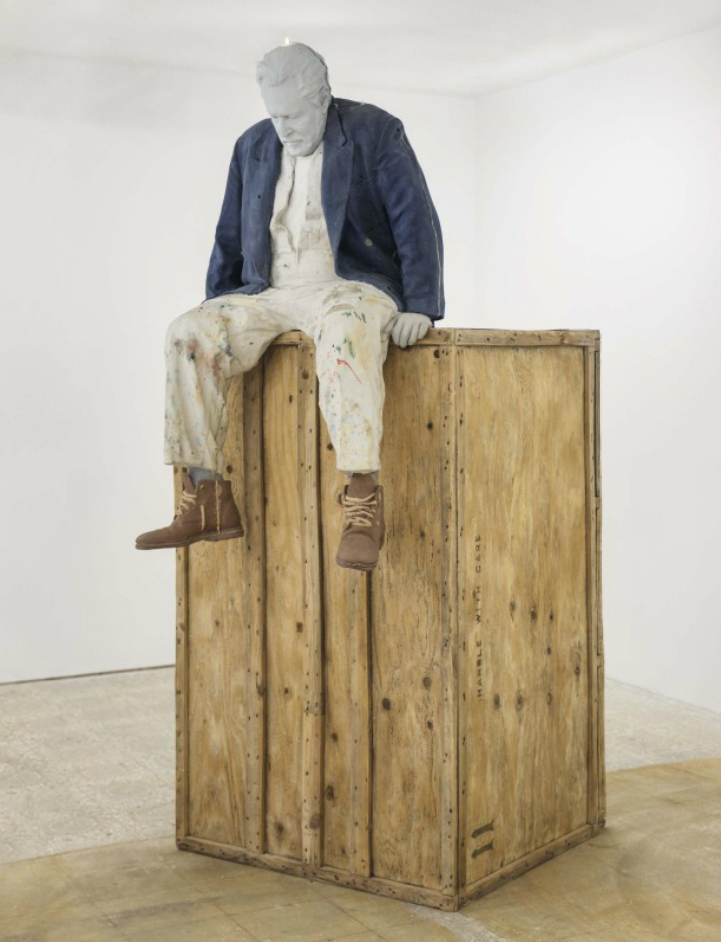 Urs Fischer (b. 1973) is a Swiss-born artist, living and working in New York City. His work samples modern and contemporary art history, infusing his unique sculptures with easily detectable traces to the works of other artists. His sculptures are full of references to the past, borrowing from Martin Kippenberger, Claes Oldenburg, John Baldessari, Allen Jones, Robert Gober, Sigmar Polke, Donald Judd, Paul McCarthy, Bruce Nauman, Matthew Barney, Fischli & Weiss, among many others, appropriated in Pop-like spirit and exhibited in Surrealist-like manner. His large-scale candle (lit to self-destruct) “Untitled”, 2011, (a replica of Giambologna’s “Rape of the Sabine Women”, 1574-82) is a glaring metaphor, containing themes Fischer reuses throughout most of his work. His abduction of content, his twist of influences, his use of sculpture combined with performance, documenting and suggesting disappearance, and his tactics of economic inversion can be detected. In “You”, 2007, the artist removed the floor and foundation of Gavin Brown’s Enterprise, NY, leaving a 38 x 30 foot crater, 8 feet in depth. It is gesture of removal reminiscent of Michael Heizer’s “negative sculpture”, “North, South, East, West” from 1967 and 2002, and the land art of Walter De Maria’s “The New York Earth Room”, 1977. Situated in a commercial gallery space, Fischer’s removal carries with it reversal of not only space, but of exchange value, as the work was for sale. Fischer’s iterations extend to museum duplication as well. In “Last Call Lascaux”, 2009, the artist wallpapered an entire gallery of the New Museum, NY, with the walls’ exact photo-duplicate, to trompe-l’oeil effect, redoing what was already done. Fischer’s works are typically very expensive to produce and often heroic in scale, from Matta-Clark-like wall removals as seen in “Portrait of a Single Raindrop”, 2003, to Oldenburg-like sculptures such as “Untitled (Lamp/Bear)”, 2005-06. Cataloging his range of influences can be dizzying. Fischer’s unique blend of art-play has provided fertile ground for seemingly endless production. His sculpture and paintings are in a sense full of art, and similar in spirit to the sample culture created by hip-hop. In a 2012 interview with The Wall Street Journal, Fischer remarked “One of the best sculptors of the ‘90s in my opinion, is probably Dr. Dre”, a remark comparable to the tongue-in-cheek wit perfected by Andy Warhol. Urs Fischer is represented by Gagosian Gallery.