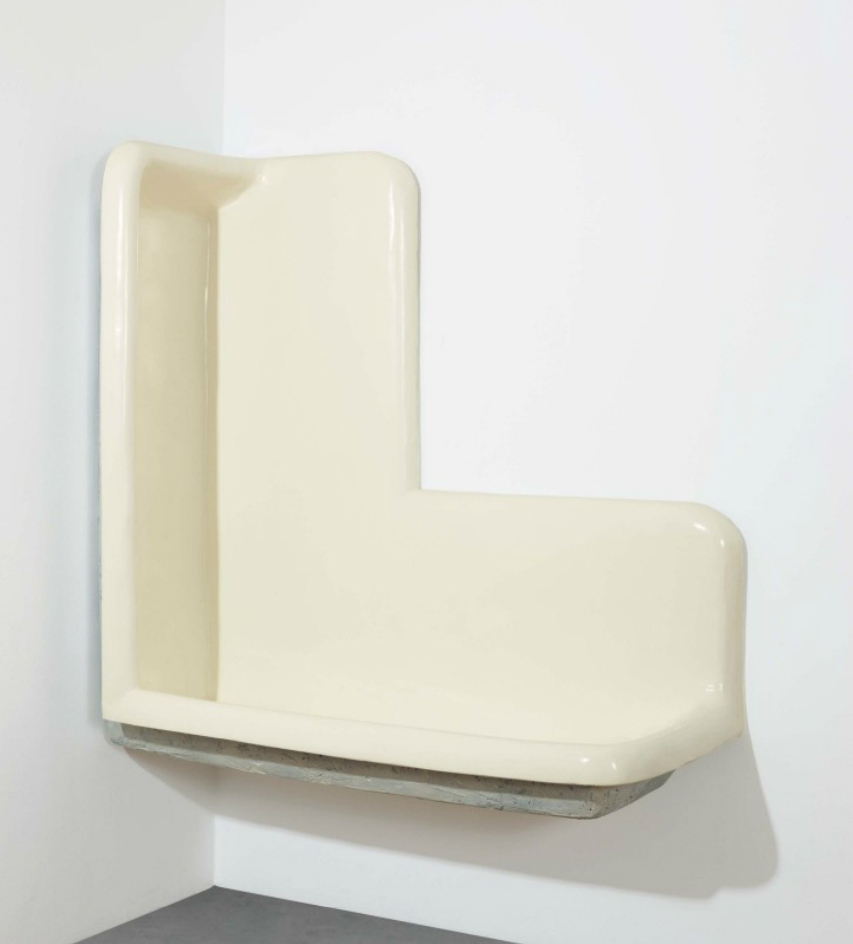 “Most of my sculptures have been memories remade, recombined, and filtered through my current experiences”. Robert Gober (b. 1954) is an American sculptor, known for his distorted, handmade recreations of overlooked domestic objects, such as sinks, doors, wallpaper, cribs, and chairs. Gober, responds to the AIDS crisis and identity politics so prevalent the 1980s and 1990s. He often arranges his sculptures in a stage-like setting, transforming the gallery into an installation. His work incorporates themes of mourning and melancholy, memory and loss, the fragility of humankind, sexual desire, and trauma. In one of his earliest works, “Slides of a Changing Painting”, 1982-83, Gober projects a succession of slides, displaying a year’s worth of photographed stills, of a single-panel painting, worked and reworked. This work serves as a diary or memoir, merging both past (the different states of the painting) and present (the work as a whole). The objects and themes introduced in his slide piece would soon permeate his sculptural and installation practice. In “Untitled”, 1984, Gober recreates a basic sink out of plaster and semigloss enamel paint, deciding not to include any sense of plumbing needed to make this sink useful. The viewer is left with a dysfunctional, blank-stared object that only references cleanliness. His works are meticulously hand-made and this capability gives Gober the ability to distort objects into a dream-like reality. “X Playpen” from 1987 performs a similar psychological function, transforming the everyday into a misrepresentation, rethinking childhood and its irregular relationship to the present. Inherited experience, borrowed from adults, rooted deep in one’s childhood, is one starting point for Gober’s creations. In the mid/late 1980s he begins to incorporate truncated or distorted body parts into his work. In “Untitled”, 1987, children’s legs form an anchor, which an adult leg must bear and uphold. This work seems to be reinforced by the wall of the institution. Other body sculptures, such as “Untitled”, 1990, present the lower body as vulnerable and sexually exposed, the upper half, non-existent, metaphorically crushed by the wall, a reflection on the AIDS epidemic. Some of his torsos are more mournful, fully dressed yet equally vulnerable, marked for death, wax sculptures as candles waiting to be lit. (See “Untitled”, 1991) Water eventually began to flow through Gober’s sinks and became a central theme from 1992 onward. The water, referencing purity or cleanliness, is situated within a theatrical or staged environment. Gallery rooms are transformed into installations, as in his “Untitled” installation for Dia Center for the Arts in 1992. (One can get the sense that his reuse of the title “Untitled” also plays a role in expressing absence). This installation presents the viewer with a jail cell window, sinks with running water, suggesting a running brook through a forest, newspapers and a box of rat bait. All is artificial, all hand-made, the forest is painted. The water, however, is real, installed as a soothing effect, full of redemptive promises, animating the jail-like interior with a hint of escape. Robert Gober is represented by Matthew Marks Gallery. See also Kiki Smith, Paul McCarthy, Mike Kelley, Matthew Barney, Charles Ray, Felix Gonzalez-Torres, and Louise Bourgeois.