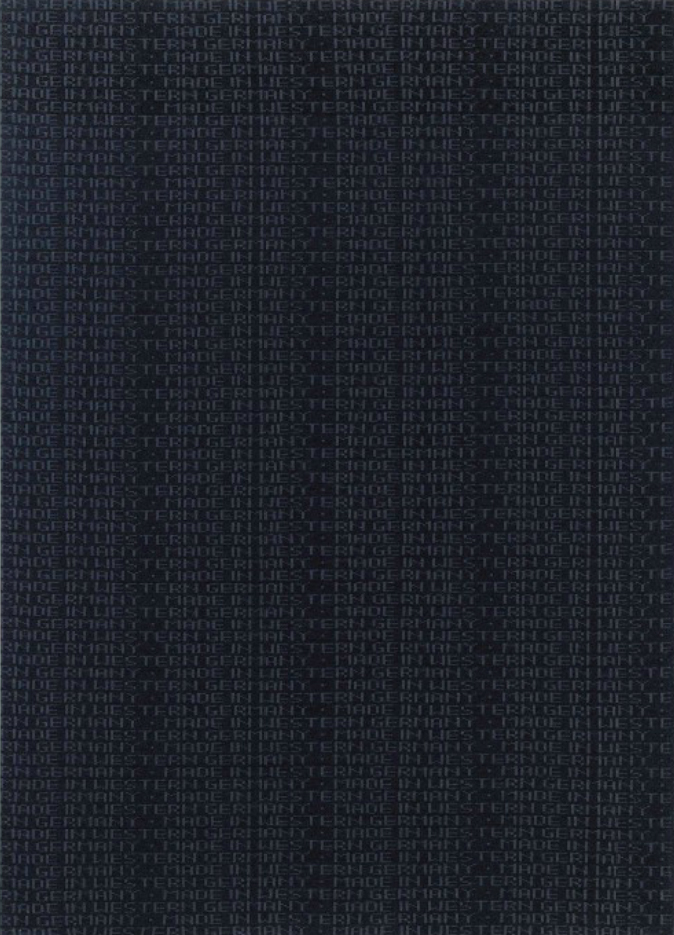 Rosemarie Trockel (b. 1952) is a German Contemporary artist. She became known in the German art scene, largely dominated by men (Joseph Beuys, Anselm Kiefer, Sigmar Polke, Gerhard Richter, and Georg Baselitz) in the 1970s. Through her creations she questions the categories that legitimize art, social order, and gender identities. Considered her signature material, machine-knit wool has been used in her most well known works. Her works in wool, produced in the 1980s, combine the conceived “feminine” activity of hand-knitting with that of its “male” counter-reference of industrial production (the works are digitally produced and machine-knit). Her knitted works are stretched like canvas over stretcher bars. They vary from pieces that neutralize meaning by repetition and juxtaposition, as in “Untitled (Hammer and Sickle)”, 1986 and “Untitled (Woolmark/Playboy Bunny)”, 1985, to works that are allusions to monochromatic and minimalist painting ranging from Yves Klein to Bridget Riley. She is known for disrupting visual art hierarchies. Her subversively softened appropriation of these historical paintings as subject matter, testify to this. This theme has continued throughout her career with “Painting Machine and 56 Brush Strokes”, 1990, a machine that makes paintings from brushes constructed with the hair of artists including Georg Baselitz, Cindy Sherman, and Barbara Kruger, confusing notions of authorship. “Spiral Betty” from 2010, references the work of Robert Smithson and Dan Flavin, which miniaturizes Smithson’s “Spiral Jetty” to decoration while rendering kitsch Flavin’s fluorescent light. Trockel’s work explores ways to undermine “meaning”, commonly assumed as reality. “Meaning”, one might argue, has its roots firmly planted in historical and contextual conditioning. In “A Cosmos” 2012-13, Trockel uses her own “retrospective” as a critique of this historical conditioning by mixing her work with the work of unknown and known artists, “chosen out of the empathy she feels for the frankness and inventiveness with which they look at questions that she too asks herself”. People who inspire her, who help create her personal record of influence are hung alongside one another at varying heights, with inconsistent lighting and wall color. Often choosing to recreate everyday objects, tables and chairs, into a gallery setting, (See “Copy Me”, 2013 and Geruchsskulptur 2, 2006), Trockel’s work de-stabilizes meaning and disrupts systems to open the viewer’s mind to the myriad versions of reality. Rosemarie Trockel is represented by Sprueth Magers in London and Berlin, and Gladstone Gallery in New York.