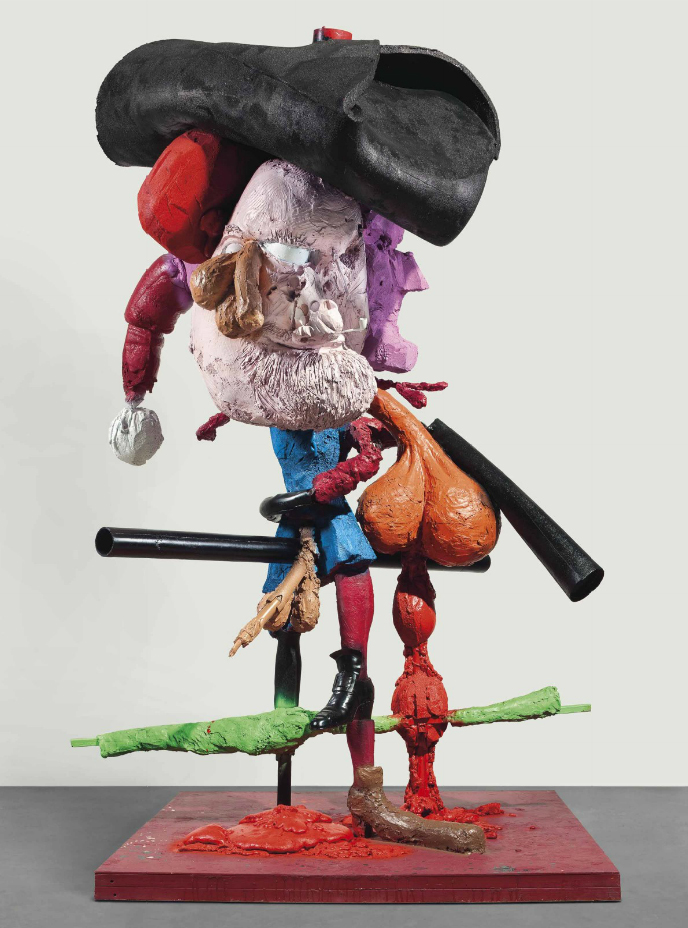 Paul McCarthy’s (b. 1945) artwork is difficult to identify as a chronology of phases. His work, since the early 1970s, share similar themes of family dissolution, the absurdity of normalcy, irresponsibility, the ubiquitous mediocrity of American entertainment-consumer culture, sexual deviation, and the resultant social traumas. They are expressed in what he terms a “program of resistance” via live performance, recorded performance, sculpture (still and animated), and video and theatrical installation, identifying with and exaggerating the absurd, the messy and the perverse, to cartoon-like proportions, throwing it aggressively back in the public’s face in antagonistic fashion. His work embraces a “childish” rebellion against “father” figures and can be detected through early performance works such as “Face Painting – Floor, White Line”, 1972, in which McCarthy used his body as brush, dragging himself with white paint across a floor, a subversion of Abstract Expressionism that clearly embraces the physical, psychologically-laden side of “action painting”. Seemingly childish in presentation, his works are very serious, involving adult themes, of adults as children, as distorted, base-like, often sexually ambiguous products of Disney, westerns, modern myth, and other Hollywood fantasies. “Bossy Burger”, 1991, and “Pinocchio Pipenose Household Dilemma”, 1994, are both recorded to resemble television programs, showing an adult (played by McCarthy) in character-like costume, performing absurd tasks in claustrophobic settings. Other productions such as “Painter”, 1995, satirize the modern painter as a cartoonish, mumbling, madman, obsessed with sales. He utilizes animatronics to pervert the American Western, as in “Yaa-Hoo Town” 1996, which presents the viewer with a large scale, movie set full of mannequins involved in sex and violence. Sculptural works employing similar mechanized activity include “The Garden”, 1992, which presents robotic men copulating with a nature-like set of trees from the TV western “Bonanza”. McCarthy’s sculpture is not always animated. “Spaghetti Man”, 1993, and “Tomato Head (Green)”, 1994, are product adorned mannequins alluding to sexual indifference, confusion, interchangeability and commercial identity. McCarthy’s army of deviant doll-like hybrids and mutated myths, has extended to giant inflatables of “Santa Claus with Butt Plug” and mutilated “White Snow Dwarfs” made of colored silicon. McCarthy’s work is filled, often to the point of spilling, whether physically, psychologically, or metaphorically. This attitude circles back to his earlier work “Ketchup Sandwich”, 1970, in which the empty cube of Minimalism, oozes blood-like ketchup, pointing to an internal mess that compliments an object-like façade of contemporary culture. McCarthy has lived and worked in and around Los Angeles since 1970, collaborating recently with his son Damon McCarthy. He is represented by Hauser & Wirth. He has influenced artists Cindy Sherman, Mike Kelley, Jason Rhoades, Jonathan Meese, John Bock, Charles Ray, and Jake & Dinos Chapman. See also: Bruce Nauman.