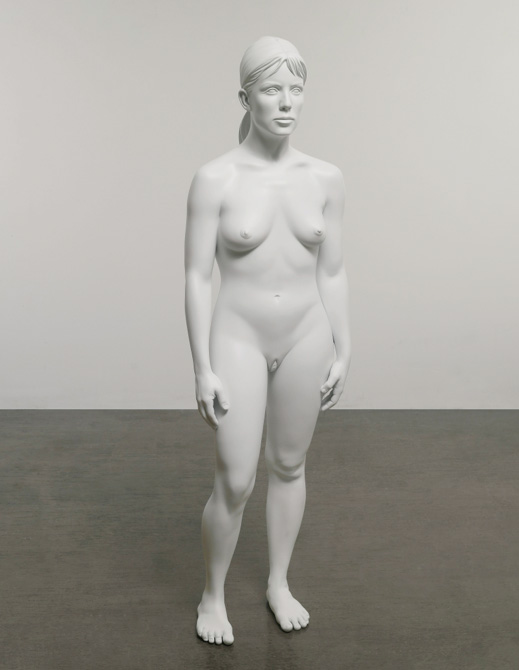 Charles Ray (b. 1953) is an American sculptor widely known for his works of visual trickery that catch the viewers off guard and command further investigation. Ray has described his work as so abstract that it becomes real and so real that it becomes abstract. Influenced by Anthony Caro and David Smith, Ray began his investigations in the early 1970's into sculpture as an activity rather than a presentation of form. Early works such as "Concrete Block Sculpture", 1971 put potential energy on display and led to Ray's use of his own body as sculptural component. In "Plank Piece", 1973, Ray's body is aggressively pinned against the wall by a plinth, somewhat reminiscent of Richard Serra's "Prop" pieces from the late 1960s. These body works had a theatrical effect. They became a sort of performance sculpture that Ray would continue through the 1980s and gradually move on from. "In Memory of Sadat", 1981 and "Phantom Limb", 1981-85, show the artist's early intentions to create provocatively deceptive works. Eventually Ray would eliminate the live body from his work in favor of combining the life-like with formal structure. In "Viral Research", 1986, a liquid links all objects on the table through a plumbing, which calls attention to the objects interior. Although not the first to reflect upon sculptures common lack of interior (see Paul McCarthy's "Ketchup Sandwich", 1970), Ray's work successfully plays with the viewer's inner desire to want to touch as reassurance. It is almost as if the one's eyes are not convincing enough. "Ink Box", 1986, is an open three-foot cube filled to its brim with black newspaper ink. To touch this work would cause the ink to spill. Similarly in "Ink Line", 1987, black ink falls from a dime-sized hole in the ceiling to one of equal size on the floor. It appears as a solid but is actually a continuous stream. Beginning in 1990, Ray discovered a way to work the body back into his work by using mannequins as body surrogates. These body ideals have been eerily engrained into consumer consciousness and promote a plasticity that seems frighteningly familiar and remarkably inner. His "Self portrait", 1990 disturbingly depicts himself as mannequin and his "Fall '91" series further disrupts the viewer's senses through a 30% scale increase, turning the familiar mannequin into monument. This theme reaches a psychological climax in "Family Romance", 1993 in which children and parents all share the same height, playing with our presumptions of family balance, distorted by scale alone. "Hinoki", 2007 is a later work of perceptual play in which Ray has recreated a rotting maple tree from hinoki or Japanese cypress. The tree's exterior and rotted interior has been intricately carved by Japanese master craftsmen and resides in the Art Institute of Chicago. Charles Ray is represented by Matthew Marks Gallery. He lives and works in California. See also Maurizio Cattelan, Jeff Koons, and Paul McCarthy.