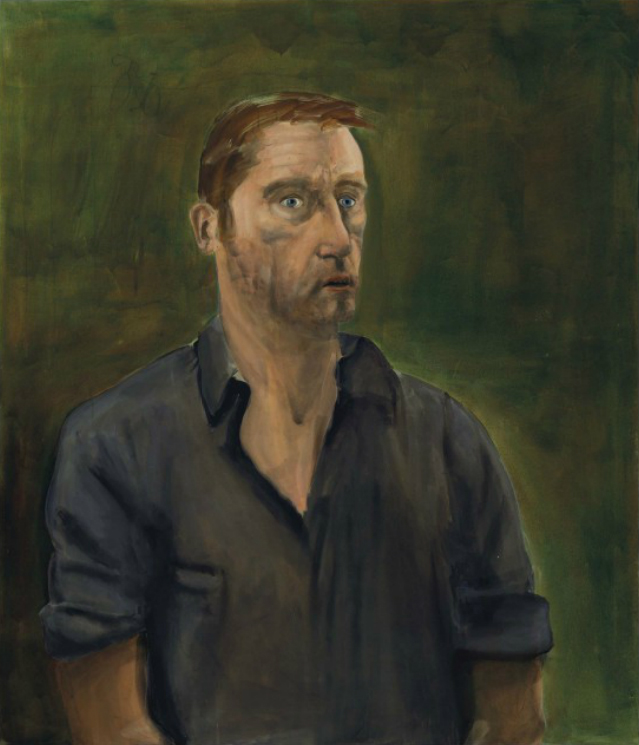 Albert Oehlen (b. 1954) is a German painter who creates collage-like pictures that mix elements of abstraction, figuration, art history, computer-generated graphics, and advertising. Beginning in the 1980s, Oehlen made paintings of “intentionally bad” taste, merging aspects of figuration and abstraction using dirt-like colors. Figuration is what the Abstract Expressionists of the 1950s sought to do away with. This newer style, generally referred to as Neo-Expressionism, pieced together styles borrowed from art history, as a collection of quotations, often called “pastiche”. Although not an admitted Neo-Expressionist, Oehlen’s body of work shares overlapping qualities. Oehlen’s early work intentionally posits these opposed styles, of figuration and abstraction against eachother. His is a style of styles that he continues to develop today in radical fashion. “Hey Mercy”, 1983, borrows many things. Duchamp’s “Bicycle Wheel” and a nude doll from Surrealist Hans Bellmer are set on an crude Abstract Expressionist background, while the work as a whole becomes a cheap joke reminiscent of the tongue-in-cheek attitude of Pop Art. By the end of the 1980s, Oehlen abandons figuration in order to create works that he calls “post-nonrepresentational”. He again borrows painterly styles from the past, especially from Jackson Pollock and Willem de Kooning. He mixes these obvious references with a mishmash of abstract gestures. Clean lines are countered by smears, sprayed paint sits on top of brushed impasto, geometric shapes comingle with drips, while figures are vaguely suggested in fragmentary abstraction. All elements seem to be speaking at once, evading logic. During this same period Oehlen confuses his art practice as well, by introducing his “Computer Paintings”. Beginning in the early 1990s, he uses a graphic design program and a commercial grade printer to create large black and white computer-generated pictures. Oehlen blows these images up, prints, and works them over with paint. See “Der Vergiftete Asket, (Poisoned Ascetic)”, 1992. There is a palpable distance in these works between what we can call the abstraction or “action painting” of the top layer and the simulated abstract-like qualities of the printed whole (product) of the bottom computer layer. Oehlen is a pioneer, in this respect, credited with this use and exploitation of digital technology. By the late 1990s, Oehlen would gradually work representation back into his paintings beginning with gray works such as “Akkordeon”, 1997. In 1998 Oehlen begins to incorporate imagery found from advertising, and other sources. He glues these images on the canvas and works them over with his growing vocabulary of abstract gestures. “English Courses”, 2008, and “Navidad” 2008, are such works, in which Oehlen smears the paint on using his fingers as to somehow symbolically deface the intrusiveness of advertising. Oehlen remarks: “What I wanted was an abstract painting that seems irritated, because of the pushy elements of advertising.” With his work from the early 2010s, Oehlen continues his referential play, pushing expressive painting further into a self-aware paradox, one in which abstraction's own history renders any future gesture as derivative, at least when written about. Albert Oehlen is represented by Gagosian Gallery and Galerie Max Hetzler. He lives and works in Bühler and Segovia. See also David Salle, Martin Kippenberger, Jeff Koons, Neo Rauch, Christopher Wool, Georg Baselitz, Sigmar Polke, and Gerhard Richter.