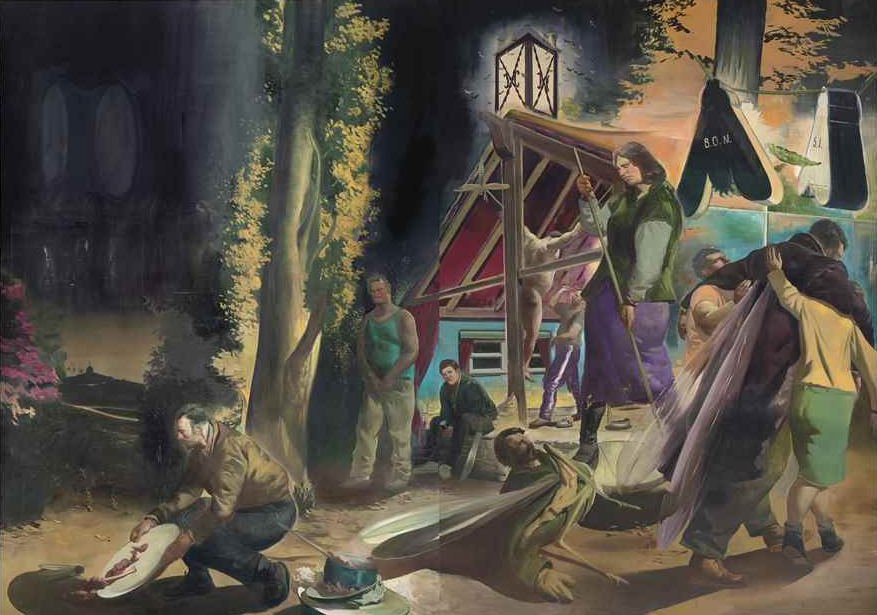 Born in 1960, Neo Rauch grew up in Leipzig, East Germany, one year prior to the construction of the Berlin Wall. He studied figure painting at Leipzig’s Academy of Visual Arts in the 1980s during a time when representational painting was considered obsolete. He gained international success through 1999’s Armory Show in New York. He is a prominent member of the New Leipzig School, whose members include Matthias Weischer, Tilo Baumgärtel, Martin Kobe, Tim Eitel, Christoph Ruckhäberle and David Schnell. This group rose to prominence after the reunification of Germany in the 1990s. Rauch’s paintings are characterized by a combination of realism and abstraction. He distorts proportions, alters perspective, ignores gravity, using his figures, not as participators in a specific narrative, but as elements whose form is contorted to abstract principles of color, balance, scale and proportion. As well as narrative, time is also absent. His figures cannot be identified as belonging to any specific time period and this is complimented by the arbitrariness of the places they occupy. Perhaps in contemplation of Cold War communism, further confused by East Germany's release into a capitalist west, Rauch’s work can be seen as reflecting the surrealist state that history and conflict produce. In an interview with The Art Newspaper in May 2011, he remarks, “I have to ask myself what I expect from painting: should it be subservient to my ideas or a queen that I have to serve? The text (idea), which I regard as a private matter, must be able to stand being dragged diagonally across the canvas. If it loses something along the way, so much the better, since it then gains something that it may have urgently needed: sensuality and a truth that is rooted in non-verbal space.” Neo Rauch is represented by David Zwirner and Galerie Eigen + Art. See also Daniel Richter and Georg Baselitz.