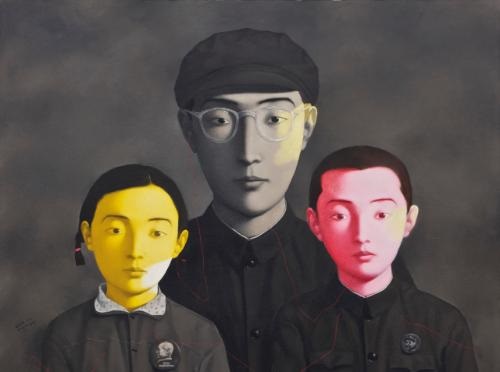 Since the mid 1980s, Zhang Xiaogang (born 1958), has reacted against the official style and collectivist attitude of Mao-instituted, Soviet Realism, dominant since the 1960s. Along with other Chinese artists, including Fang Lijun, Zeng Fanzhi, Yang Shaobin and Yue Minjun, Xiaogang explores topics of individualism and individual desire said to have been suppressed by collectivism, while embracing western art and western philosophy. Inspired by the work of Gerhard Richter, whom he encountered at Kassel’s Documenta 9 in the early 90s, Xiaogang set out to reflect upon his own history and merge this with the techniques of western art. In 1993 he began his ‘Bloodline’ series after discovering old photographs of his mother and father stiffly posing with him and his older brothers. Popular in the 1950s and 60s, these photographs carry within them a heavy amount of symbolic, historical and psychological significance rooted in the attitude of the Chinese Cultural Revolution. Xiaogang used this subject matter as the foundation for his work throughout the 1990s. Expressionless, militarily garbed and connected by red lines that cut across the canvas, these families represent the quintessential image of life under Mao Zedong. Zhang Xiaogang has called them “false portraits” because they do not depict any one particular family. These are fictional families, watery-eyed, large portraits on gray backgrounds, symbolizing a collective past that bound together the state and the individual. His acceptance into the western art market, a market dominated by western tradition, further solidifies the confusion that these images will forever embody. Zhang Xiaogang’s work has increased in popularity and value paralleling China’s economic growth. He is represented by Pace Gallery in New York/Beijing.

Video: Interview with Zhang Xiaogang on Chinese Contemporary Art in the 1980s, by Asia Art Archive