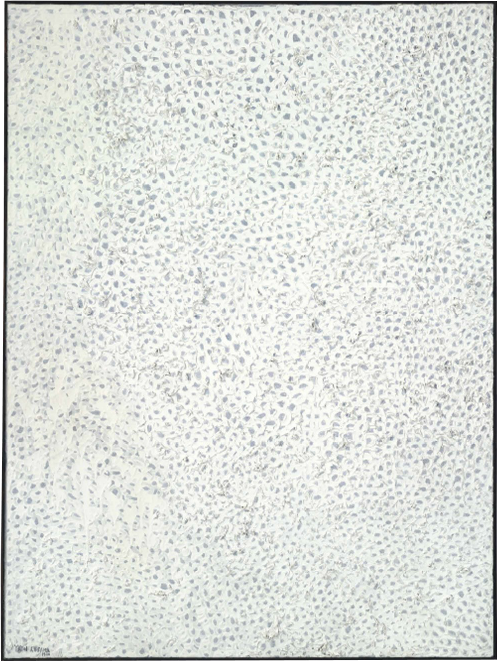 Yayoi Kusama (b. 1929) is a Japanese artist known for her paintings, sculpture, performance art, and environment installations surrounding her involvement in the 1960s New York Pop Art movement. She has used the polka dot as her signature trademark since 1950 and has incorporated it into almost every aspect of her work. Kusama, born into a family of seedling merchants, northwest of Tokyo, suffered from hallucinations and mental illness as a young child. Creatively starved by her conservative parents, she relocated to the United States in 1957, quickly making her way to New York City, arriving into a male-dominated, Abstract Expressionist, and Minimalist art scene. Despite the odds, Kusama found acceptance, initially with an exhibition in 1959 of her large white canvases titled “Infinity Nets”. Enthusiastically praised by Donald Judd, these works depict fields of speckled dots created by a repeated pattern of white loops. After this success, Kusama quickly moved on to explore “soft-sculpture”. With “Accumulations”, 1961, she took found household objects, such as a chair and a baby carriage, and covered these with a multitude of cotton-stuffed, white-painted, phallus-shaped sculptures. Choosing to multiply the phallus, essentially mocked it, rendering it ubiquitous and numb. Creating these sculptures, served as a way for Kusama to deal with her fears surrounding sexuality caused by her father’s extra-marital affairs that she witnessed as a child. This process of acknowledgement through repetitive work is what Kusama calls: “obliteration”. She would eventually use the phallus sculpture to create environments such as “Aggregation: One Thousand Boats”, 1964 and “Infinity Mirror Room–Phalli’s Field”, 1965, the latter merging phallic sculpture with red polka dots to stress lack of differentiation further "obliterated" by their infinite repetition through the use of mirrors. Beginning in 1965 Kusama became increasingly involved with the hippie counterculture, embracing and promoting her personality through “naked happenings” in which she would daub nude participants with her colored dots. These events were staged in very public spaces such as Wall Street, the Brooklyn Bridge, and Central Park, in protest of the Vietnam War. During the late 1960s she was more widely publicized than Andy Warhol (whom she claimed copied her) and even started her own magazine “Kusama Orgy”. Kusama understood that publicity was part of her art, whether good or bad. Her fame soon exhausted as the Summer of Love concluded and facing media-backlash Kusama returned to Japan in 1973, apparently the victim of critical ambivalence and overexposure, which led to a mental breakdown for which she voluntarily checked herself into the mental institution where she still resides. Throughout the remainder of the 1970s and 1980s she wrote prose and poetry and was largely forgotten until the late 1980s and early 1990s when a series of retrospectives revived her art career. In these later career years, the pumpkin has become a sort of self-portrait and she become very popular through works such as “I’m Here, but Nothing”, 2000-2008 and museum-hosted infinity rooms such as “Fireflies on the Water”, 2002 displayed at the Whitney Museum of American Art in 2012. Yayoi Kusama is represented by David Zwirner. See also Damien Hirst, Jeff Koons, Takashi Murakami, Ivan Navarro, and Josiah McElheny.