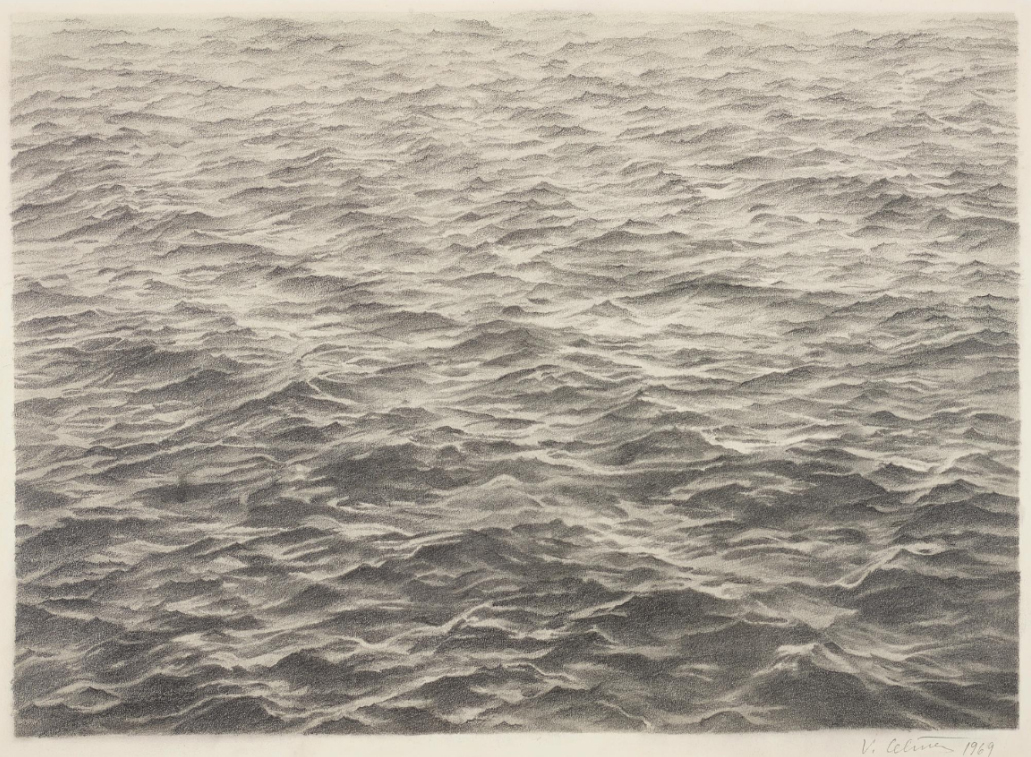 Vija Celmins (b. 1938) is a Latvian born, American artist known for her photorealist paintings, drawings, prints, and sculpture. Her work is primarily monochromatic and always labor intensive. She takes seemingly anonymous imagery of oceans, spider webs, stars, planets, rocks, deserts, among others, and makes them more intimate by skillfully rendering and reworking them over and over again, layer upon layer, until a density is reached that she remarks as having arrived at the "fat" of the image. This technique removes her work from the photographic reference and shares with the viewer a different experience, one in which there is a recognition of this removal in exchange for something other. A feeling of hand-rendered totality or completeness, of sensuousness, is radically more present than in the "anonymous" original. This is a subtle subversion of surface. Most of Celmins' depictions deal with images of surfaces and her disciplined reworking of a surface as subject matter, onto a surface of the picture plane, contribute greatly to this metamorphosis of image. A "Desert" floor becomes more full and "packed" through Celmins' rendering. Since the 1960s, Celmins has developed a conceptual practice surrounding the photographic image. Early works such as "Heater", 1964, or "Lamp #1", 1964 communicate a sense of freedom that the artist had of being able to paint the most banal objects in her studio. Her early interest in considering the obvious and overlooked, as credible subject matter, would allow her to develop an understanding of and respect for the lengthy process involved in reaching a level of transcendent imagery. In the late 1960s and throughout the 70s Celmins abandoned painting, preferring a more reductive approach of graphite pencil. When she began her "Ocean" drawings, she thought that she would copy only one image for the remainder of her life. She eventually grew tired of this idea and decided to draw multiple ocean surfaces, each one subtly pulling back and forth. Beginning in 1977 she decided to cast stones in bronze and dedicated the next five years to carefully copying each stone, choosing to exhibit the original and the copy side by side in a work titled "To Fix the Image in Memory", 1977-82, which she completed after moving from Los Angeles to New York City. Her conceptual and disciplined endeavors continued and painting, woodcut, charcoal drawing, and erasing are further explored from the 1980s onward. Depth and flatness coexist in her gorgeous pictures of the "Night Sky". Her "Web" series depict delicate spider webs hanging onto the edge of the picture plane. She comments: "The images are not from observations of nature, but are 'found images' from old magazines, books and photos. Thus they are already flattened and a step removed from nature. In my work, the information they hold is re-told and given a new life in a new context. Where Turner found light and color so inspirational, I have tended to drift toward an exploration of darkness. The material I have used has pushed me in that direction." Vija Celmins is represented by McKee Gallery in New York. See also: Mark Tansey, Chuck Close, Malcolm Morley, Gerhard Richter, and Rackstraw Downes.