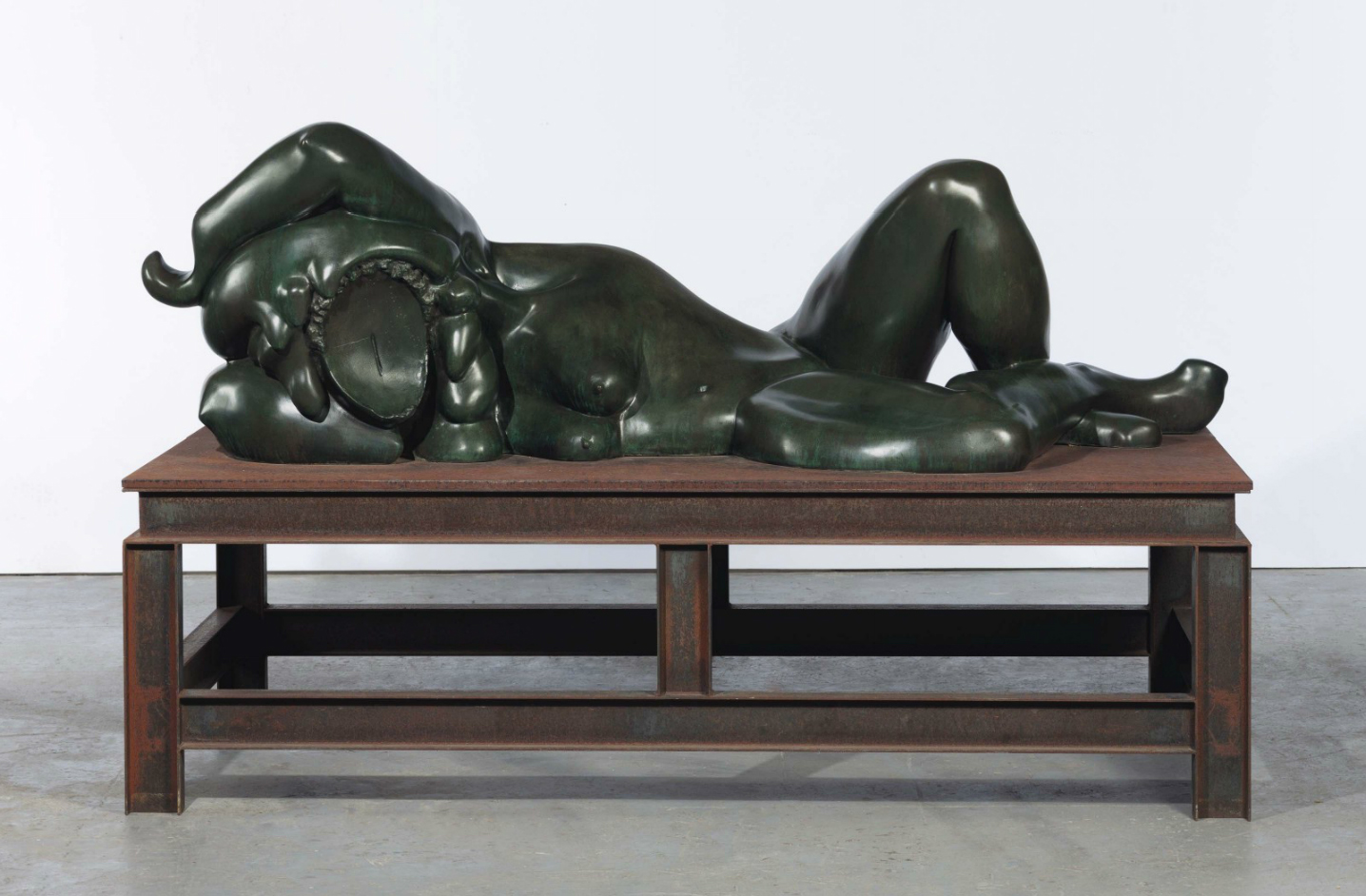 Thomas Schütte (b. 1954) is a contemporary artist who lives and works in Dusseldorf, Germany. He is primarily known for his experimentation with architecture as sculpture and model as monument. His work often uses art context as subject matter and engages in playful subversions of this context. Art to Schütte seems like a system and his survival within this system depends on the discovery of loopholes. This attitude could be linked to his early start. Schütte’s work grew out of Minimalism and Conceptualism in the 1960s-70s, that he learned while studying under Gerhard Richter and Benjamin Buchloh at Kunstakademie in Dusseldorf. It was before his graduation in 1981 that Schütte began to be recognized. His "Ringe (Rings)", from 1977 – a wallpaper-like effect of wooden rings attached in a pattern that looks like it could be symmetrical, but in fact it is not – not only calls into mind the seriousness of Minimalism (see Niele Toroni) but also suggest home decoration and a playful version of institutional critique (see Daniel Buren). Schütte’s work mostly exists in the form of models and in his work the model becomes monument and the plan becomes program. His “Die Fremden (The Strangers)”, 1992, caused a stir at documenta IX in Kassel. Viewers noticed these life-sized, ceramic miniatures on the roof as refugee-like intrusions into one’s idea of sculpture and monument. Still earlier works, such as “Mann im Matsch (Man in Mud)”, 1982-2009, initially explored the non-heroic in heroic context. The idea arrived from Schütte not being able to stand a toy on its own. Schütte considers this a monument of failure and has made several large-scale versions. Public monuments are typically celebratory depictions of heroes. Schütte’s enlargement of a model poetically references a more probable and less ideal reality, something more universal. He has applied this reversal of expectation to architecture with convincing success. His “One-Man Houses”, 2003-11, are architectural models, based on ventilator systems that he found in his workshop. They are presented on their plinth-like shipping container, waiting for their wealthy collectors. In these works, Schütte further confuses scale. Some models have been transformed into life-size structures as seen in “One-Man House II”, 2007-2009 in France. This is a sculpture of architecture, a room for meditation that calls into question form and function. Other examples are “Holiday Home for Terrorists”, 2012, based on the shape of a stair for a spiral staircase, and “Model for a Hotel”, 2007, which sat atop Trafalgar Square’s famous Fourth Plinth. Schütte’s artistic practice is very diverse and also includes drawings and watercolors for it is the sketch that operates similar to the model. He is one of the very few contemporary artists who have successfully reclaimed figuration through sculpture, which was considered too ornamental after the art movements of the 50s-70s. His “United Enemies”, 1993-2011, one hour long studies, transformed to freestanding bronzes via digital scanning and molding, along with his “Frauen”, 1998-2006, show the rich possibilities for figurative sculpture, hybrids that take off where Henry Moore left off, that fully process and expand upon the contributions of Minimalism and Conceptualism. Schütte turns our notion of the monumental, be it the heroic art gesture or the towering statue/building, toward the humanist by subverting scale and upsetting our idea of balance and power, heroically. Thomas Schütte is represented by Peter Freeman, Inc. in New York, Frith Street Gallery in London, and Konrad Fischer Galerie in Dusseldorf, among others.