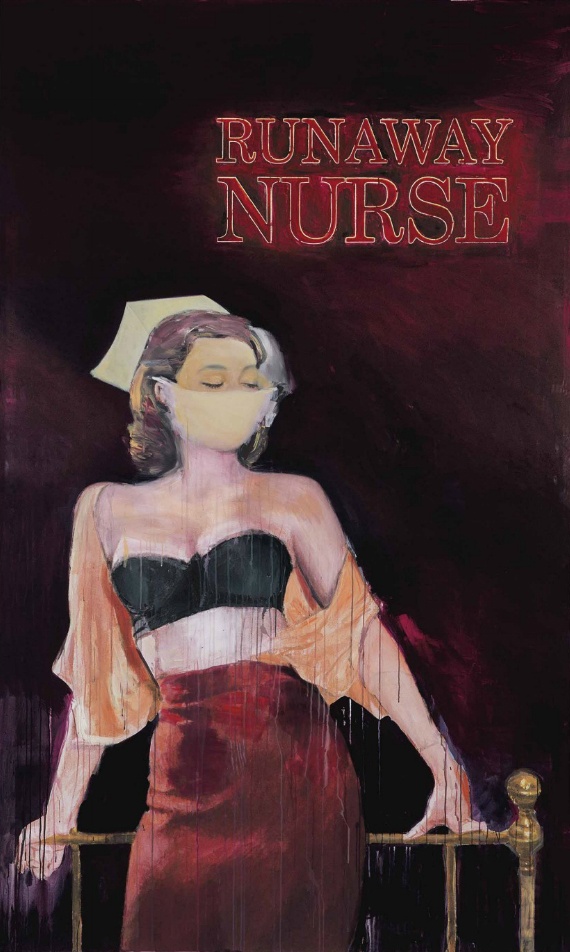 Born in 1949, Richard Prince began re-photographing images from discarded advertising pages that he collected from his job as a cataloguer in the tear-sheet department of Time-Life during the mid seventies. His early subject matter focused on advertisements carefully cropped to remove text. The results were images of “Oceans without surfers” and “cowboys without Marlboros”, of models, living room furniture, pens and watches. These images reveal a system of image patterning that collectively shape identity through mass-media, a viewpoint he shared with his contemporaries and other members of the “Pictures Generation”, Sherrie Levine, Cindy Sherman, Louise Lawler and Sarah Charlesworth. Prince would often present his images in groups which came to be known as “Gangs”, images of the same size and content, framed together, depicting media images of niche factions of American culture, such as biker-girls, entertainers and surfers. Instead of presenting images of celebrity, Prince is interested in fringe imagery as kind of stand-in celebrity. Even when directly referencing celebrity in works such as "Publicities" he ironically signals another tear-sheet fringe by grouping and often forging the celebrity's headshot. From re-photography Prince has continued his style of appropriation into his “Joke” paintings, depicting punchlines painted over a monochromatic or abstract background. Appropriating text, often poking fun of religion and marriage, Prince states of the works, “I never really started telling, I started telling them over”. He has also used digital forms of appropriation in conjunction with analog production. Prince’s “Nurse” paintings, debuting in 2003, utilize techniques of scanning, inkjet printing and painting, of images of pulpy cover-art from inexpensive medical romance novels. Richard Prince now lives in upstate New York. He is represented by Gagosian Gallery. An excellent video lecture from Nancy Spector, chief curator at the Solomon R. Guggenheim Museum, can be found at the Walker Art Center's website.