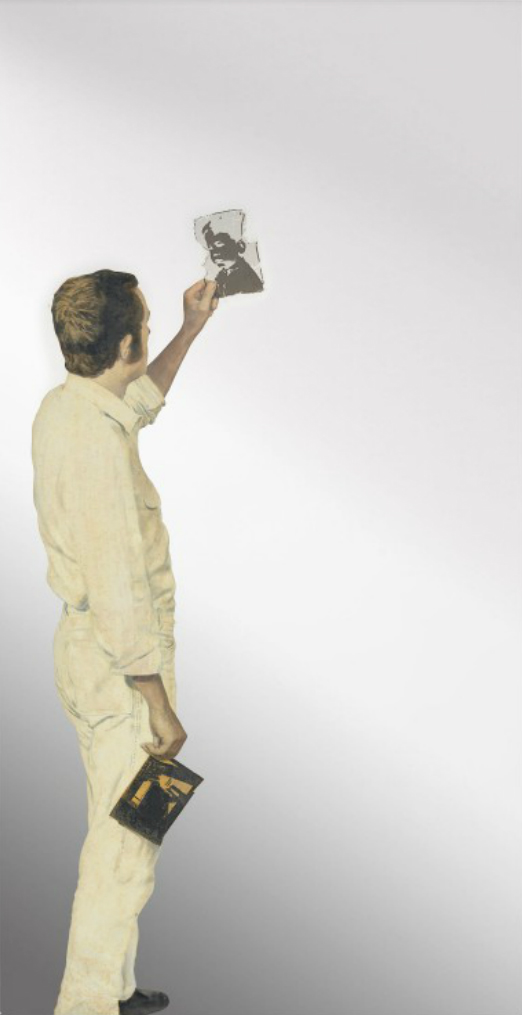 Michelangelo Pistoletto (b. 1933) is an Italian painter, action and object artist, and art theorist who helped develop the founding principles for the Italian Arte Povera movement in the 1960s. His initial international success came from his series of “Mirror Paintings” in which he attached tracings of photographs on tissue paper, to mirror-finished stainless steel. These works allowed viewers to see themselves as part of the work, alongside the static photo-like depictions of life-size people and objects. Pistoletto found a way of inserting reality into art, through reflection, which opened up a dimension of social engagement that he has explored to present-day. Following the success of his early mirror paintings in the early 1960s, demand for Pistoletto was very high. After being advised by his dealer Leo Castelli to relocate to the United States and join his coterie, or else face separation, Pistoletto decided to stay in Italy and embrace art market rejection. He states, “I reacted to an idea of the market that rained power on a cultural and practical control that forced you to feel you were part of a clan or alone.” Pistoletto created “The Minus Objects” during 1965-66. These works, a collection of sculptures made out of “poor” materials, are cohesive only in the fact that they are all puns or one-liners. They were constructed to deliberately repel the art market – which typically prefers a more packaged serialized sense of artistic identity and production – and had the effect of freezing the demand for Pistoletto works altogether. With “The Minus Objects” and works from 1967, such as “Venus of the Rags”, Pistoletto helped inspire the Arte Poevera movement, which sought to break down divisions between art and life, and established hierarchies, not only in traditional art materials, but also in art market practices popularized by the consumerist environment of Pop and post-Pop Art.

Following “The Minus Objects”, Pistoletto gravitated toward theatre were he could truly interact with the public and free himself from art objects. In 1967, he emptied his studio and invited others to enter the space. By 1968, “The Zoo”, a group of artists, filmmakers, and intellectuals, had crystallized. They engaged in happening-like works of collective theatre and performed “actions” in public spaces throughout Europe until 1970. Pistoletto continued his theatrical projects through the 1980s, occasionally returning to sculpture and his mirror works. Later self-reflective mirror works go on to explore accumulation and exclusion (see “Mirror Cage”, 1973-92), while other work combines the mirror with performance. In “Twentytwo Less Two”, 2009, the artist shatters framed mirrors in front of a gallery audience. The works create the stunning visual effect of the audiences’ image shattering with the mirror, into a scattered reflection. Pistoletto is represented by Simon Lee Gallery and Luhring Augustine Gallery and Galeria Continua. He lives and works in Italy. In 1994 Michelangelo Pistoletto founded Cittadellarte, a socially engaged institution that aims to inspire and produce a responsible change in society through ideas and creative projects. See also: Jannis Kounellis, Mario Merz, Pino Pascali, Marisa Merz, Giuseppe Penone, Giovanni Anselmo, and Giulio Paolini.