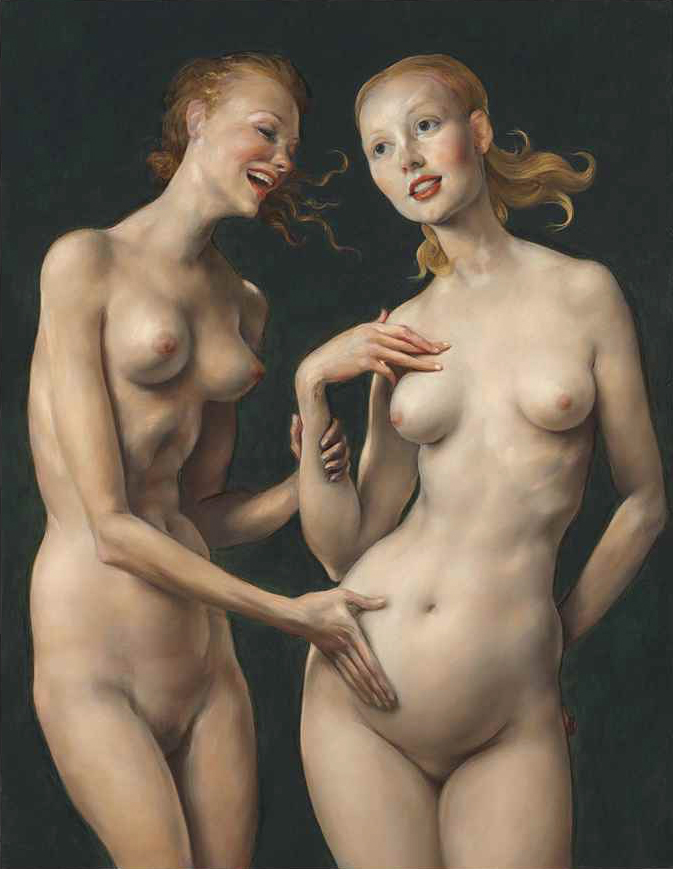 John Currin (b. 1962) is an American figure painter known for his paintings that combine his skill of traditional European painting techniques with lowbrow subject matter. Notoriously known for his paintings of balloon breasted women (see “Jaunty and Mame”, 1997) and works based on Danish pornography (see “Kissers”, 2006), Currin’s figures, whether sexually engaged or not, are almost always satirical. In Currin’s works, illustration and traditional painting overlap, Norman Rockwell meets Fragonard and R. Crumb meets François Boucher. Physical exaggerations, such as elongated necks or disproportionate limbs, are just as present in his works as the oddness of the scene depicted and the irony of their traditional execution. The traditional technique he employs, Old Master paint application and high-Mannerist composition, is positioned directly in contrast to the subject matter depicted, creating an oddity that becomes doubly ironic when one thinks of wealthy collectors purchasing these satires of opulence. Currin appropriates the language of painting, from the Renaissance to French Neoclassicism, and fuses it with typically “middle” American associations. Currin’s early work signals his interest in appropriation. In 1989 he presented a series of paintings, at White Columns, of girls selected from high school yearbook portraits. See “Untitled”, 1990. Struggling as a figurative painter amidst New York’s avant-garde of video and installation art, Currin got his break in 1997 as his style moved from “The Magnificent Bosom”, 1997, which used techniques of Courbet inspired palette knife painting, to one that uses “grisaille”, an old master technique of under-painting, seen in “Heartless”, 1997. Inspired by his relationship with artist Rachel Feinstein, Currin’s career was finally in full swing after his inclusion in the “Projects” 1997 exhibition at MoMA where his work was displayed alongside Elizabeth Peyton and Luc Tuymans. He married Rachel in 1998 (“Honeymoon”, 1998). In Currin’s works Middle America meets Versailles. Works such as “Thanksgiving”, 2003, depict his wife as three different personalities, painted during her pregnancy, for which the turkey alludes, the chandelier and the mirror perhaps referencing Jan van Eyck’s “The Arnolfini Portrait”, 1434. John Currin’s controversial works from his 2006 exhibition at Gagosian Gallery in New York, depicting paintings of hardcore pornography (see "Rotterdam", 2006) are the most perverse and sensational to date. Since his pornographic outburst, which successfully furthers his combination of high and low to absurdly interesting proportions, Currin has chosen to place the porn images in his backgrounds, creating sexual undertones more obviously present than in his earlier work. See “Tapestry”, 2013 and “San Remo”, 2013. He has stated: “I liked the idea of a beautiful painting that has this big problem”. John Currin is represented by Gagosian Gallery. See also Lisa Yuskavage, George Condo, and Jeff Koons.

Video: The Un-Private Collection: John Currin and James Cuno, president and CEO of the J. Paul Getty Trust. From: The Broad
View Lot